A 200th anniversary certainly is a reason to celebrate. The story of the Bremen Town Musicians was first published in 1819 in the second edition of the Brothers Grimm’s Children’s and Household Tales. The book’s foreword is dated 3 July. So at the start of July 2019, Bremen will be throwing a grand birthday bash for its four fairytale heroes.

The highlight will be a packed anniversary programme lasting nearly one week that will take place in Bremen city centre and on the banks of the Weser river during the Breminale festival from 3 to 7 July.

The programme kicks off with the Bremen Philharmonic Orchestra’s window concert on 3 July, when the musicians will be playing to the audience in the central cathedral square from the surrounding buildings. The Stadtmusik festival of street music begins immediately afterwards in honour of the Bremen Town Musicians. Until 6 July, it will see street musicians, bands, ensembles and many others playing on selected streets and squares in the city centre. The Musikantenmob follows on 6 July. This flash mob-style event will feature bands that are taking part in the Breminale festival, members of the Bremen Philharmonic Orchestra and residents of Bremen, young and old. A mass cacophony of music is planned that will begin in the city centre and end at the Breminale festival on the banks of the Weser where the proverbial robbers’ house from the Grimm fairytale will be pulled down!

According to one survey, the Bremen Town Musicians are known throughout the world. They are more famous than Werder Bremen football club, or the Weser, the river that is so essential to life in the Hanseatic city. When visitors were asked to name something they associated with Bremen in a poll conducted by Bremen University in 2007, one third cited the Town Musicians before anything else.

he most famous representation of the Town Musicians is the bronze statue created by sculptor Gerhard Marcks. It is situated to the west of the town hall, which is a UNESCO World Heritage site. Cast in 1951, this statue was originally just a loan. But thanks to generous donations by Bremen citizens, the city was able to buy the figure from Marcks in 1953, and it has been in its present location for more than 60 years now. Touching the two front legs of the donkey is meant to bring good luck, which explains why they are so shiny!

Right next door, but down a few steps, is what might be described as the Town Musician’s ‘local’, the Ratskeller. There are two depictions of the musicians in the vaults of this historical pub. In the room named after German writer Wilhelm Hauff, the four animals are dining at a large table in a 1927 fresco by Max Slevogt. The Senate Room contains a rotating sculpture by Heinrich Möller.

Returning above ground from the Ratskeller, you come face to face with another instance of the group diagonally across the street. On the Deutsches Haus building, they are dragging themselves up the brackets of a pub sign from the Pschorr brewery (now Hacker Pschorr), visibly exhausted from their long journey towards Bremen. The brewery is no longer located in the building, but the fairytale heroes continue to look out across the bustle of the city centre and the shops on Obernstrasse.

The Town Musicians have also left their mark in other parts of the city, for example in the Expressionist ensemble of Böttcherstrasse. And they have become permanent fixtures in the streets of Bremen too. A variety of papier mâché statues bring a touch of fairytale magic to Bremen’s city centre. These figures look a bit different from the literary characters, at least when it comes to their colour. Dressed in the bright green kit of Werder Bremen football club, or wearing stripes and other patterns, they are part of a community project. As mascots of the ‘Leselust’ (reading pleasure) initiative, they aim to introduce Bremen’s youngsters to the enjoyment of books and reading. 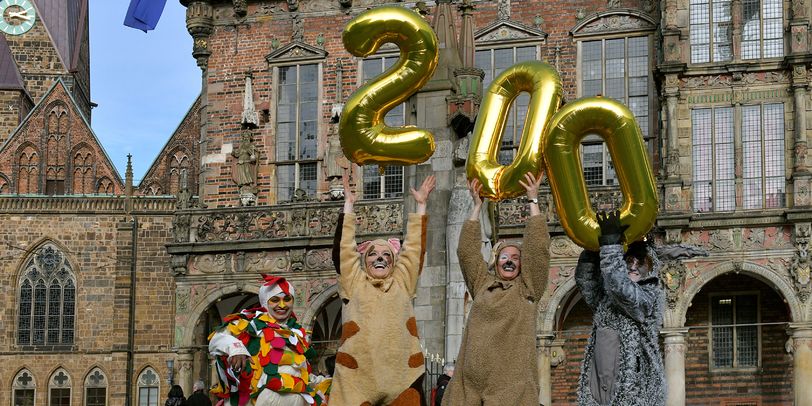 That takes the Biscuit !